I read a yearly summary of movies which had Install in its top ten.  The movie begins with Asako, the main character, daydreaming in English class about talking to a boy in a clock tower.  The teacher wakes her up and asks her “Who were you with in your dreams” which struck me as an odd question, to which Asako replies “Your Sweetheart” and then running out of the classroom.  Folowing this, for reasons unknown to us, Asako decides she doesn’t want anything she owns anymore and hauls it all out to a dumpster outside her apartment.  A 10 year old, Kazuyoshi, sees her throwing out an Apple Classic computer and asks if he can have it, which she allows.  On a further chance encounter she finds out that the 10 year old is filling in for a sex worker in a chat room, which sets the plot in motion for Kazuyoshi to become Asako’s 10 year old cyber pimp.  As the plot, or really lack thereof develops, Asako looses respect for men, has a couple of cheesy dreams and doesn’t go to school for several months.  Its not until several months later when her mom finally discovers her room is empty that everything begins to fall apart.  Also, in usual asian film style, there is a confusing subplot involving the boy whom she was dreaming about in the beginning of the film. 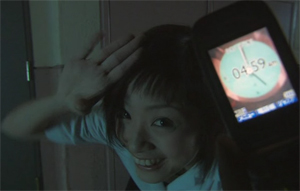 The music of the movie maintains a strangely upbeat and strongly Japanese form, even at some rather akward for the situation, very much adds to the style of the film.
Overall the movie was decent, featuring a number of amusing moments, though I wouldn’t put it in the top 10 of last year by any means.