Kinamand (Meaning Chinaman in English) was a beautiful and interesting film.

The main character, Keld, is a plumber who is more or less stuck in a rut. When his wife of many years leaves him for another man, unable or unwilling to cook for himself, he begins to eat at a Chinese restaurant near his house every day.  This begins a friendship between Keld and the owner, Feng.  When a pipe breaks in the kitchen, Keld offers to take a look.  Seeing that the kitchens plumbing is not up to code, Keld offers to replace it in exchange for free meals.

When Keld finishes the plumbing job, Feng very happy with Kelds work asks Keld to marry his sister Ling, so she may stay in Denmark with her family, in exchange for 25,000 Danish Kroner (Roughly USD$4,000) Keld contemplates the offer momentarily and then declines.  Keld is then shown at a divorce settlement where he is asked to pay his ex-wife 50,000 DKK.  Keld, unable to pay the amount returns to Feng and tells him he will accept if he would be willing to double the offer.  Feng accepts. 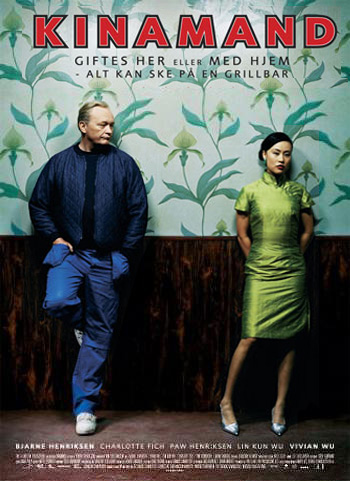 Ling and Keld, after a meeting with immigration officials, hold an extravagant wedding. Keld, a seemingly apathetic, slightly brutish man, is pulled into a remarkable world of subtlety and tradition while living with Ling, growing to appreciate it, and falling in love with Ling in the process.

The movie was quite understated, which I strongly appreciate. It was visually beautiful, whereas Europe was shown with kind of a grey dreary pall, the Chinese figures in the movie, as well as the brief moments in China itself were quite bright and colorful, which helped illustrate the stark differences in cultures the movie was attempting to convey.

Kelds character was very relatable, trying to find meaning to life while rolling with the punches. The juxtaposition of the portly, inelegant Keld to the petite, beautiful Ling was quite striking and in fact made for a wonderfully odd coupling.

I highly recommend this film to anyone who can appreciate subtlety, it being one of my favorites of recent years. As I understand it one of the only places to find this movie in America currently is by Netflix, where it can be streamed or received via physical disc, and this would be my recommendation

Comment by: Michelle on Aug 26, '10
Just streamed this on Netflix. What a wonderful film. the cast was great. I agree with the subtlety of this film. The characters where very endearing to me. I highly recommend this movie
Comment by: d8nvn on Oct 29, '10
Kinamand is filled with restraint from the opening scene. Subtlety is king here with WU and Henriksen delivering great emotional pain through simply facial expressions. The film does offer a mid course dialog which puts you on to any thing you have missed. The story is bittersweet, tragic and so very real that I found myself wishing for a Hollywood ending. Does anyone know where the poem at the end comes from? "I thought that love could wait too late too late too late" (Omi)
Comment by: icelandgirl1993 on Dec 29, '10
im doing SA about this film , and i was woundering which 3 characters should i write about, Keld and some 2 others ?
Comment by: lulu028 on Jul 19, '12
This film is wonderful. I have been living in both China and Denmark. I was impressed by the movie which illustrate the core of these two different cultures
Comment by: Jesse Donat on Jul 3, '13
comment test