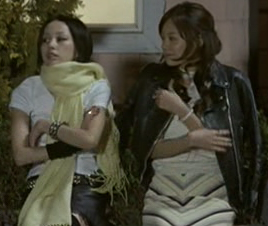 I’d just like to start this review saying I got this movie because it has Ryuhei Matsuda ( 松田 龍平 ) in it, of Blue Spring and Collage of our Life fame. Some of you may know he is my favorite Japanese actor.  He had a strange part in this film, managing to be a major character, but having perhaps four lines.  Also, I’d like to note the way he held the guitar seemed awkward in such a way as to seem almost identical to something straight out of Guitar Hero.

This movie is apparently based off a popular Japanese Manga, and in fact made for a extremely popular movie in Japan.  I had no idea of this while watching it. 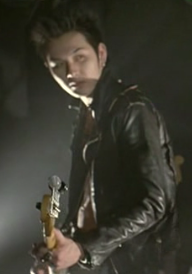 This movie focuses on two women named Nana, who though complete opposites, through anomalous circumstances became very good friends. [Back Story Explanation for those of you who are lacking in Japanese:  Nana while being a Japanese name is also Japanese for the number seven.  Hachi is Japanese for the number eight, and also a common name for dogs.  The gothic Nana renamed the other Nana “Hachi” informally to keep them from getting confused and because she said the preppy Nana acted like a puppy.]  They meet on a train to Tokyo, which becomes stuck for several hours due to high snow.  Hachi is heading to Tokyo to be closer to her boyfriend who is going to art school in Tokyo, Nana is moving to Tokyo to pursue her dream of being a famous singer.  After reaching Tokyo they head their separate ways, only to meet up again when looking for an apartment when two real estate agents show them the same apartment.  Number 707 nonetheless.  After some arguing about who should get the apartment, gothic Nanas friend who is with them suggests they live together, and with little ado they agree.

The movie ends up first going off first into Hachi’s immediate romantic life with her boyfriend, and then moves on to Nana’s past and her coming to terms.  Nana was in love with Ryuhei’s character “Ren” when they were in a band together “Blast”, but they separated when Ren joined a new band “Trapnest”, which we latter find out has become a huge hit, whereas Nana’s band has only met with marginal success, and the man they got to replace Ren looks like a Japanese Bob Dylan no less.  From reading about the original book Blast was supposed to be extremely punk whereas Trapnest was supposed to be more mainstream rock.  They both in the movie though come off as very generic soft rock though, which is kind of lame. 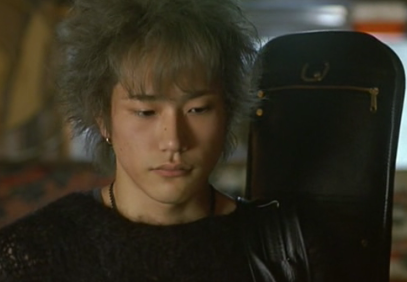 From the visual side of things the movie had a very romantic feel; for example nine times out of ten when someone is outside it was snowing, and flash backs always happened to be in the winter (though this is quite possibly because the movie was filmed in a short period of time).  The inside of the Nana’s house was white.  White and snow are a recurring theme to the film.

The songs they sang were cheesy at best, mixing Japanese and english in the same sentance, as I described to kern “Blah blah blah I love you blah blah blah baby!” as it would be to the casual listener.

Overall the movie was decent for those of you saps who like pointless foreign romance/lost love flicks.