I hesitate to say I hated this movie, because I didn't. I want to hate it, I desperately want to hate it. I can't though, mostly because if anything it did get me thinking.

This film was the polar opposite of the first which I reviewed a little over a year ago. Whereas the first was artful and creative with its character construction, they knew with this film that the characters were already built our and despite being put into very straining situations there was very little character growth. Heck, the whole play of how the number 7 connected the two Nana's was almost completely avoided, although I imagine some could argue this is a good thing. 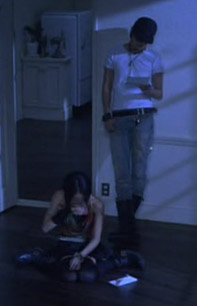 One of the oddities of this film is of the six main characters, three were played by different actors than in the original film. I honestly didn't even notice, save the fact that I was wondering why Ryuhei Matsuda's character had received such a bit part,

as he was one of the larger focuses of the first film. This was why I did some research and found out that it wasn't even him. They do their best to mask this by hiding his face for most of scenes he is in, often having his back to the camera, or more creatively having him reading while wearing a baseball cap.

This film, in stark contrast to its predecessor, is largely a series of unfortunate events and ends on an exceedingly sour note. The climax of the film involves the happy go lucky Nana finding out she is pregnant. Having recently dumped the guitarist from Trapnest (whom she only sought in a moment need) for the guitarist from BLAST who genuinely cares for her, she is uncertain which is the father. The guitarist from Trapnest (Takumi) offers to marry her, and after some reluctance she agrees. She moves in with him just in time for him to leave on a 6 month tour. While Trapnest gathers outside, the lead singer makes a comment about how Takumi has a wife in the UK, though this fact is never again mentioned. At the end of the movie, Nana cries while holding the other Nana, realizing she has ruined her life.

When the credits rolled I was genuinely surprised, expecting some kind of at least semi-happy resolve. 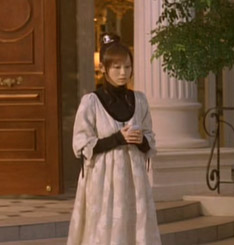 The movie ends with everyone's life in shambles.

Not only for the massive change in direction, but the genuine lack of style which the other film pulled off fairly well, I have to say this film didn't even come close to living up to the first film. I was genuinely disappointed in this film.

As I've told people with the original Matrix, if you liked it, don't see the sequel, the same applies to this, unless you enjoy seeing characters and concepts you've grown to like being terribly abused.