This movie is hard to describe.  It has five main plots, hence the name, that in the end work them selves together.  One interesting aspect of the film is that as it introduces plot lines, it visually numbers them on screen.  It begins with a man burying his wife, his wife being played by the beautiful half Japanese, half Spanish Reika Hashimoto.  He returns home to find his wife sitting at his kitchen table, which sets up what is to become a pattern for his plot.  Next we are introduced to a woman who works in advertising and a hypnotist who are in bed together.  Throughout the film the advertising woman has a number of "Visions" of commercials.  Some are quite humorous while others just make you say "What!?"  The next plot is kind of a comic relief plot… do you really need a comic relief plot in a comedy?  I don't know, but it basically involves a group of friends, where a Japanese man is terrified of the prospect that his really ugly, male, friend is in love with him.  Next we are introduced to an English hit-man and his Japanese assistant on an airplane on their way into Japan, whereas he causes quite a ruckus on the airplane harassing a flight attendant about her purpose for living.  The last plot involves a man who visits the hypnotist, is hypnotized into believing he is a bird, and the hypnotist is killed by the hit man before he is un-hypnotized.  This was my favorite plot, and the way in which it connects to the first is pure genius. 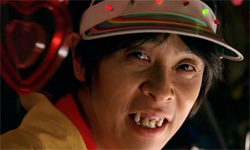 The imagery and colors of this film were beautifully intense. It felt… surreal.  They do an amazing job though of making you not realize how strangely colored things are, which the end result gives the film just an amazing feel.  For instance the airplane the hit-man came over on was bright pink, but I don't believe I noticed until reviewing the film just now. 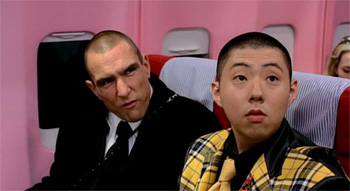 The soundtrack includes some interesting choices, all very rhythmic, sometimes with the scene seemingly moving to the beat.  There's an amount of western music I haven't seen in any other Asian films.  The soundtrack adds greatly to the feel of the movie.

Overall I recommend the movie highly.  It was greatly entertaining and beautifully composed.  It was a distinct comedy, which I see few of, but I found it highly enjoyable.